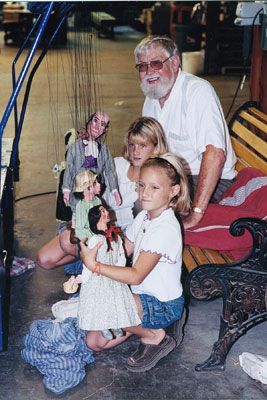 The History of the word ‘Marionette’ - At times and places though-out history, Christians could not practice or teach their faith openly, so they started telling the biblical stories through small puppet plays. These puppet programs became known as “The Little Mary’s” or “The Marionettes”. Our ancestor’s used stories to reinforce and relay the messages of their faith and to help teach their children the beliefs, principles, and morals they held. Such as truth, justice, faith, virtue, love, family and that good will always vanquish evil. This program is a wonderful way to help expose children and promote theater, reading, literature, and cultural diversity in our community’s.

The Elsenpeter Marionettes tradition of puppetry started in Elen, Germany approximately 145 years ago, by Richard’s great-grandfather. Their traditional form of puppetry has been handed down through four generations. Mr. Elsenpeter describes his form of puppetry as the “old world or European style” of puppetry. It’s very nostalgic and is rarely seen anymore in America because of its technical difficulties.