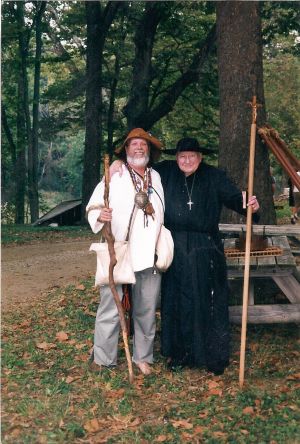 Steve has been nominated for "Who's Who Among American Teachers" three times. He currently teaches History at Mississinewa High School. Steve's interest and love for the character of Johnny Appleseed was enhanced through a Teacher Creativity Grant he received through the Eli Lilly Endowment. This grant enabled him to do an in-depth study of this beloved man who quietly touched so many lives.

Steve can adapt Johnny Appleseed to many different audiences such as, Public and Private Schools, Festivals, Church Groups, Re-enactment Events, etc. If you are interested in having Johnny Appleseed visit your event, he'd be glad to hear from you.

Steve, early in his teaching career, began to use the knowledge gained through his research to bring to life historical characters for listeners of all ages as a creative teaching technique. He becomes the character and speaks solely from their perspective and time period. One of those characters brought back to life is Johnny Appleseed.

"History can be so dry and musty if you only read about it in a book," McPhail said. "But if you can see something and use your imagination, you can get a better understanding...I will do anything I can to teach my subject better."

McPhail has read everything he can find about Johnny Appleseed and admits that Johnny is his favorite because he is most comfortable portraying him.

Both McPhail and Johnny Appleseed are men with strong faith, are pacifists and love children. McPhail admits that walking around and teasing the little kids is the best part of what he does.

"Something I think Johnny would say is that he liked younguns and critters because if they like you, they like you and if they don't, they bite you !!! I share the same outlook."

McPhail tries to portray Johnny as accurately as possible. He wears clothing common to frontiersman of the early 19th century, carries a bag of seeds to hand out, and another bag with interesting trinkets. However, don't expect to see him with a pan on his head.

"To my knowledge, Johnny Appleseed never wore a pan on his head," McPhail said. "That's just something Disney put on him."

Through his research, he also learned a lot about Johnny Appleseed's personality. Johnny was reported as being rather "peculiar." He feels that he and his favorite character share a lot of the same qualities.

"I know some people who might call me peculiar as well," joked McPhail. "Sometimes, my students just say, 'Oh, that's just Mr. 'Mac'."

When talking to McPhail out of character, it's sometimes hard to tell when he's speaking as Steve McPhail or Johnny Appleseed. It's obvious that he holds a dear respect for the life and teachings of someone who lived over 150 years ago. Their philosophies on life appear to mesh.

"Life is like eatin' an apple. You don't need a fork or spoon--you just bite right in," said McPhail.

"Sowin' the seed of apples in the frontier and sowin' seed on hope and truth in people's hearts," is how he puts it in both his, and what he believes, would be Johnny Appleseed's words.