Type of Entertainment:   Rating: Everyone 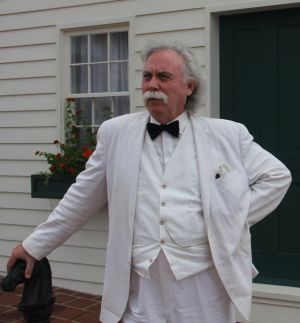 This exciting show recreates the famous Mark Twain Shows of 100 years ago. Filled with hilarious comedy and compelling drama, this show is guaranteed to entertain and educate. It’s all in the words of Mark Twain. It’s more than fun; it’s an experience.

Mr. Richard Garey combines his passion as an actor, his skill as a storyteller, and his expertise as a writer to bring the role of Mark Twain Himself to life. A talented and experienced actor with acting credits in over 40 states and Canada in a twenty-year stage career, Garey explores many dimensions of the characters he creates on stage. Mark Twain, Himself includes comedy, satire, and drama as you would expect from Mr. Twain. Garey is also the playwright who collected and assembled this one-man play from the writings of Samuel L. Clemens.

Over 100 years ago, Mark Twain announced to the country that he was running for President of the United States.  This announcement gave him the opportunity to speak on the issues.  He had much to say and still has lots to say today.  Richard Garey’s stage show Mark Twain for PRESIDENT brings the political wit and wisdom of Mark Twain to life.  Very relevant and very funny, this show tackles the issues of foreign policy, taxes, politicians, and patriotism with Twain’s insight and humor.  All in Mark Twain’s actual words, this show is authentic in every detail and is guaranteed to entertain and delight all ages.  It might also get you to think in new ways about our government.  Filled with insights, observations, and story, this show is a must-see show for 2012.  Join the party as Mark Twain, running on the Truth Party, hits the campaign trail.  Now booking through November 2012.

This exciting show recreates the famous Mark Twain Shows of 100 years ago.  Filled with hilarious comedy and compelling drama, this show is guaranteed to entertain and educate. It's all in the words of Mark Twain. It's more than fun; it's an experience.

Authentic in Every Detail
All from the Pen of Mark Twain

The "Mark Twain on Slavery" program entertains in typical Twain style but also moves to the serious side as Sam Clemens tackles the issue of slavery. In his own words, Clemens tells of his experiences and the characters who shaped his understanding of slavery from his days in Hannibal to his world-wide fame. This program covers all periods of Samual Clemens life. It starts with his life as a boy in Hannibal, the slavery he observed, and personal anecdotes of the "white town drowsing in the summer sun". It includes material from his Autobiography, his essays, his short stories, and The Adventures of Huckleberry Finn. One of the most touching pieces is taken from "A True Story" in which Clemens tells the poignant story of his friend Aunt Rachel who had been a slave in Virginia and her amazing true story of horrendous family separation and eventual reunion. This show also includes Twain's indictment of slavery, of human cowardice in general, and our cruel treatment of our fellow human beings. This show reveals the Mark Twain you never knew. This live theater show has been performed to great reviews in over forty states and Canada.