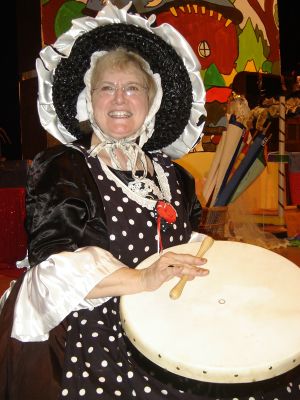 Scholars are not sure who the original Mother Goose was, but you will meet her in the creative imagination of Chris Everett’s adaptation of one of the most loved storybook characters.

Living by his motto, “The yolks on you “, this hard shelled athlete is all he’s cracked up to be. Humpty Dumpty holds records for most uninjured falls in Wall Climbing, Egg Toss, and is a National Champion Egg Roller. Ole’ Mother Hubbard, his coach says “Yes, it only took one egg scramble to make him realize that it takes a lot of falls and you have to not mind getting beaten now and then to be a good athlete.” He has received three Golden Yolk medals in the Chicken Eggaversity as top eggtorian of his class, this living legend is now rolling around in Grand Chain, Illinois. Humpty Dumpty travels with Mother Goose now as a major character in her storytelling presentations.

Humpty Dumpty, Itsy Bitsy Spider, Old Mother Hubbard, Little Boy Blue and many other childhood favorites come alive with this one-of-a-kind performance where everyone lives happily ever after.