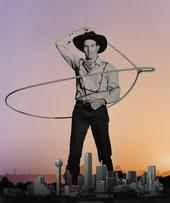 Raised on the flat, humid, boring plains of the Texas Gulf Coast, Randy was told to "get out there and start plowing" (on his father's rice farm) before he was old enough to know how to object. But he soon rebelled and was memorizing Beethoven symphonies for ten hours a day using a dilapidated mono record player with bad needles. This form of semi-autism would serve him well in his later life.

However, during his forced labor on the farm, he sang continuously, loudly, and badly for twelve hours a day. Eventually, he had to get better at it, and did in fact develop a strange, yet powerful vocal technique.

After a dozen years of classical piano and several more of trumpet instruction, he gave up the constrictive classical environment for the more fertile ground of a local polka band led by a former, rather deaf, big-band trumpet player.

This later metamorphosed into a bad country-western cover band, and with this group, at the tender age of thirteen, Randy received his first professional payment in the form of a case of Grape Nehi Soda.

Payment never seemed to get any better, but he persevered and also managed to graduate second in his class from the film school of The University of Texas at Austin, even while causing nothing but heartache and ulcers for his parents and teachers.

Again, fate took a hand, and after a late-night encounter between his Triumph Spitfire convertible and a huge opossum, which caused an uncontrolled tailspin and landed him squarely behind a stubborn tree, he found that his mental screws had been knocked loose. His stage-fright had been obliterated with one brain-damaging blow, and so he decided to sing for a living.

Moving to Dallas, Texas he became the toast of a decidedly odd western swing yodeling clique, and from there he expanded his cult status to the rest of America (and even to Great Britain, Australia, and Japan) with two CD's, television commercials, and a cameo in David Byrne's movie, "True Stories."

Soon he was making a living trick roping, yodeling, and touring the U.S. and abroad. He even played Queen Elizabeth Hall and Wembley Arena while in London.

For some inexplicable reason he immediately uprooted himself and moved north. Way, way, north. After a few years spent skipping happily across the Alaskan tundra near Anchorage and performing at coffee houses in Seattle, the Eskimo Olympics in Canada, on the CBC, and on Tom Bodett's ABC radio show near Homer, he returned to Texas to record two more CDs, showcase at Carnegie Hall, play at some music festivals, write and/or perform in a couple of film scores, perform on NPR a few times, yodel in Walt Disney's "Home on the Range," and put together shows for adults, their children, and adults who think that they are children.

He moved to Illinois where he performs at places like the New Orleans Jazz Festival, the Seattle International Childen's Festival, the The Ravinia Festival, the Illinois State Fair or the Library of Congress and yodels when and where he can, under the delusion that he is something more than that small boy who used to labor in his father's rice fields. However, he is still one of the best rice combine harvester operators in the world - a talent he can always fall back upon should the music thing not work out.